The striking Asus Zenfone 9 has been presented. The smartphone is equipped with the fastest hardware of the moment, but still easy to operate with one hand thanks to the compact size.

Asus let already found out with the Zenfone 9 and now the device has finally been presented. Like its predecessor, the Asus Zenfone 8, it is again a small, but powerful smartphone. There is no question of another model in the Zenfone 9 series, something that was still the case last year with the Zenfone 8 Flip. The Zenfone 9 is for sale for 799 euros. 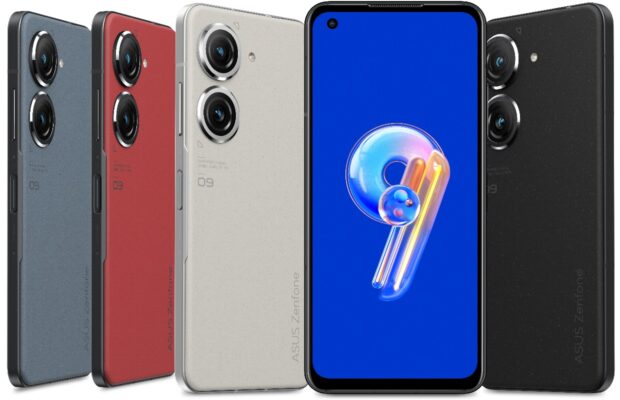 The screen is only 5.9 inches in size, so the phone is still relatively easy to operate with one hand. The resolution is 2400 by 1080 pixels and it is a colorful AMOLED screen. That refreshes a maximum of 120 times per second, but you can also set the frequency to 60 or 90 times to save the battery.

On the side you will find the ZenTouch button, which also functions as a fingerprint scanner . You can also use it to scroll through websites or, for example, to quickly open an app, start the flashlight or skip through music tracks.

The Zenfone 9 runs on Android 12

with the custom ZenUI 9 shell, which is optimized for one-handed use. You can also tap the back twice to open an app, take a screenshot or start the Google Assistant. Asus’s update policy isn’t great. The manufacturer says it will roll out two major Android updates and at least two years of security patches.

High-end hardware for ultimate use

Under the hood is the Snapdragon 8 Plus Gen 1 chip, the fastest processor at the moment. There is a maximum of 16GB of RAM and 256GB of storage. A special cooling system ensures that the Zenfone 9 does not get too hot.

There are stereo speakers on board that are specially tuned to each other. The speaker at the bottom is a bit more powerful and positioned differently than the ear speaker at the front. You can also listen to music through your wired headphones. The device is completely dust and waterproof thanks to the IP68 certification and the back consists of robust and non-slip high-quality plastic. As a result, fingerprints are not visible and the device does not slip out of your hands so quickly.

Charging the 4300 mAh battery is only possible via a cable and with a maximum of 30 Watts, for which Asus ‘just’ another charger. Wireless charging is missing, because there is simply not enough space for it.

There are a total of three cameras are present, including the 12 megapixel front camera, which can be found in a small hole in the screen. A camera with the same resolution can also be found on the back and shoots pictures at a wider angle of 113 degrees. You also use that lens for close-ups from a minimum of four centimeters.

The main camera contains Sony’s 50 megapixel IMX766 sensor. This allows you to shoot 12.5 megapixel photos, because four pixels are fused into a single one for better contrast and color reproduction. The camera also has optical image stabilization and a gimbal mode. As a result, the entire camera module moves along six axes, so that you do not suffer from blur in photos or videos.

The interface of the camera app has also been adapted for one-handed use. For example, you can zoom in with a single finger or open all settings by swiping down on the screen. Finally, there is also a pro mode, as well as all kinds of other options with which you can play with the shutter speed, ISO value or white balance.

With the Asus Zenfone 9, all kinds of different accessories are also available at the same time. market. For example, the company introduces the Connex Accessories Set. You then put the device in a bumper of hard plastic and then click a card holder or a smart stand on it – and then place the device horizontally.

A special case for your backpack is also available for immediate purchase. In addition, there has been collaboration with parties such as Rhinoshield and Devilcase for screen protectors and covers. Asus itself supplies a thin bumper case with the device.

The Zenfone 9 comes in four colors: red, black, blue and white . The device has at least 8GB of RAM and 128GB of internal storage. The smartphone can be ordered from now on, where you can choose from the configurations below, and will be delivered from mid-August. The red and blue model will follow at the end of August.

If you order the 8/128GB version via Asus itself before August 21, you will receive a 70 euro discount and pay 729 euro.